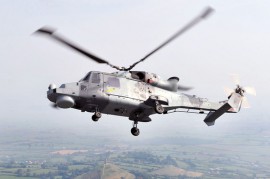 One of the greatest names in naval aviation has returned to fold of the Fleet Air Arm with the re-birth of 825 Naval Air Squadron, home of the new Wildcat helicopter.

The squadron was formally commissioned back into the bosom of the naval air wing at its home of RNAS Yeovilton on Friday 10 October.

It takes over the duties of 700W NAS, which was responsible for introducing the Wildcat – successor to the long-serving Lynx – into service and will train air and ground crew to fly and maintain the new helicopter, and provide the front-line Fleet with Wildcat flights to support ships on their operations around the globe.