On the 21st of March 2020, two days before the UK went into what was to become the first of three national lockdowns to combat the Corona Virus pandemic, three shipmates (Eric Holmwood, Jeff Hughes and Kevin Hackett) came together in the front room of Kevin's house, armed only with a selfie stick, WiFi connection and a supply of rum and broadcast live on Facebook, to the Royal Naval Association community group.

The idea had been borne out of a conversation between the three oppos about keeping Wrexham Branch shipmates connected and supported during lockdown. It was then expanded to include all RNA shipmates, throughout the wider digital world, using the Facebook community group to facilitate the connection.

The first few broadcasts were a bit hit and miss, as they found none of them had John Ford's directorial skills, but they persevered with some Heath Robinson engineering and their audience began to grow.

They were now being joined by shipmates from across the UK, but it was a one way experience, with no real scope for interaction, so a decision was made to take Tot Time onto Zoom, although still broadcasting on Facebook live for those who prefer that platform to Zoom. 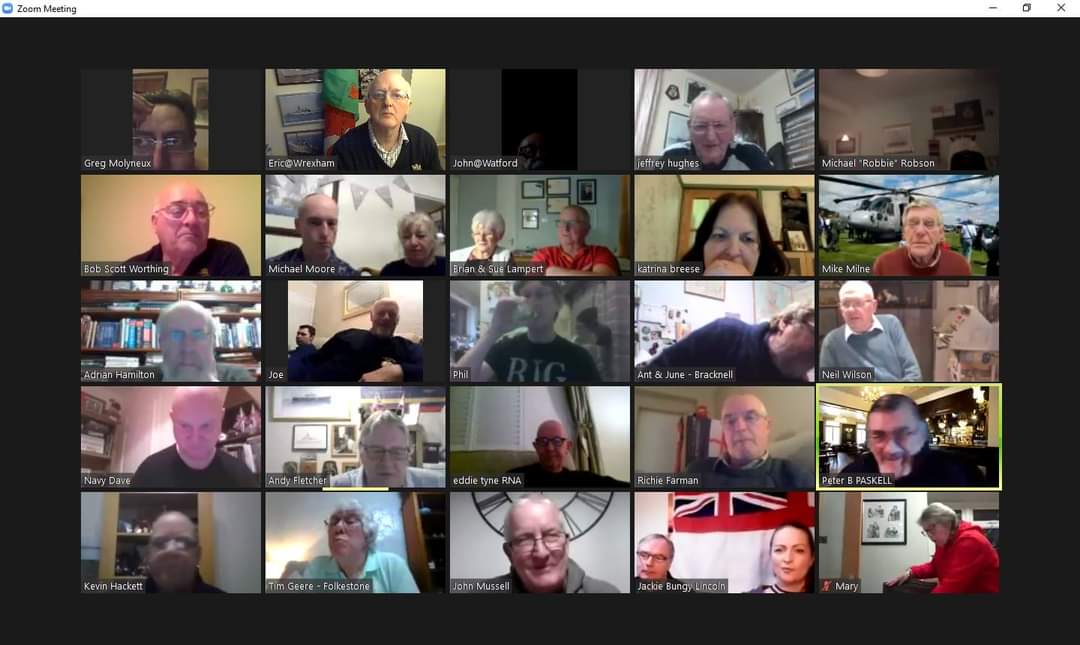 The Zoom Tot time get togethers have really taken off, with attendances of over fourty shipmates most Saturdays. They are now joined by shipmates from across the UK, USA, EUROPE and more.

A variety of shipmates from across the naval spectrum have hosted the toast, including:

Chaplain of the Fleet, Martyn Gough

... and many, many more; too numerous to name but all superb in their toasts and contribution to the night.

In the past year, they have hosted 130 Zoom sessions, with sessions taking place in the beginning on Wednesday, before moving to a Saturday night.

As an average figure they have broadcast for approximately 390 hours, although it is possibly more as meetings, laughs and banter have been known to continue into the wee small hours on a Saturday.

Their youngest shipmate is in their 30s and their eldest in their 90s, with a couple who joined the RN in the 1940s; who said you can't teach old matelots new tricks?!

They have remembered our fallen on V.E Day, V.J day, Armistice, and those lost to Covid, other illnesses and those isolated or alone over Christmas.

Tot time has become an important part of the weekly diary for many, due to many factors, but mainly because of you, our SHIPMATES, who have come onboard and got involved.

If you'd like to join in, please follow the link below and join the Royal Naval Association: Community Site on Facebook, where you'll find details of the Saturday night Tot Time under 'Events'...